Sometimes I feel like a failure. Like I need to totally re-prioritize my life, or just run away. Then I pray, and just make the next day better.

Sometimes I feel like God is helping me to be the good girl I should be, and other times I choose to do it “allbymyself!!” And hence the bad days.

Sometimes, I remember that the most important thing in life is to know God loves me, and to love Him back. Other times, I choose to focus instead on the moment I’m in, only feeling the pleasure that leaves me empty when it’s gone. The pleasure that the love of God brings lasts so much longer and leaves me different. Filled. Yet ever wanting more.

Sometimes, I feel like I’m really good at this writing thing, and I’m gonna be the next C. S. Lewis. Then I remember that it was God who gave me my writing, and He can take it away. Not to mention that C. S. Lewis got his writing from God in the first place.

Sometimes I feel like I’m the most hilarious person around, then everyone is laughing at me and there is no humor in it for me. And I remember that pride goes before a fall. Hopefully.

All the time, I know I am not perfect, and I never will be, nor should I try to be. I should instead focus on God. And just do whatever He would have me do. Love like He does. Work like He does. Help unconditionally, like He does. And I know that when I do, I become closer and closer to Him, and that is what I want. All the time.
~Emily

So, when I opened WordPress this morning, it told me thanks for blogging with them for three years. Now, I actually created my blog then, but didn’t really start blogging until last year. Anyway, it’s been three years since I created this blog. What a crazy three years. I never would have dreamed that I would be using this blog to document the adventures of my writing at least two books and a film (from my own mind, no less!!). Not to mention daily life, and my growth in God. One of my favorite (and least favorite, at the same time) things about having this blog is being able to look back at my work, and to see how I’ve improved, and how I’ve stayed the same. It is very powerful, and a little (okay, a lot ) embarrassing. Oh well. 😛 I guess now I’ll just write whatever I feel like until I deem this post done….

To start it off, I’ll talk about God. He has been teaching me so much in these last few days. I can’t really go into all of it. Basically, He has told me to trust Him, and to love Him, and to pray. Really pray. Pray the prayer that changes someone’s life. That changes my life. Starting with my heart. That I may be wholly devoted to Him, that is my desire. Not distracted by siblings, writing, boys, friends, clothes, nothing. Only Him. He needs to be my focus. My number one. The first I think about when I wake up, my last thought when I fall asleep. My dreams. Being me, I really enjoy music to help me focus on Him. My favorite being a song entitled “Focus” by Holly Starr. Go look it up. And listen to all her songs in the Focus album. Buy it. You will not regret it.

Now I guess I’ll talk about writing. I feel that this is what God wants me to do right now. And I feel that He has blessed my writing. The father-daughter story especially. He gave the story to me during a bible study, so it is really important to me. Not to talk about the film… 😉

So actually, Monday was Bright Lights. Carissa has been teaching us about the Love of God, how it affects us, how incomprehensible it is, etc… Very powerful and convicting.

And Tuesday. Nothing much happened during the day, but in the evening, after Mama and Papa went on their date, us children went to the church for music practice. While there, I did my history homework, and…

… I started the script. Yes, I actually did. 🙂 Announcement number one. And number two, we have a film meeting in a few days. I’m hoping to talk about announcing the film to the church, and casting, among other things. I hope it goes better than the last film meeting, which was rather, um, stressful, due to the amount of people and the lack of a table and Mr. Ortiz. But we did get stuff discussed, kind of. 😛 Announcement number three, on Monday, Brandon emailed me that he has finally got the falcon model for our film! It looks amazing. I can’t wait to see it in action. 🙂

I hope you all have a great weekend and following week. I have a bunch of posts swirling around in my head. Hopefully I’ll get around to writing them sometime soon… 😉 Also, I’m hoping to work on the Father-daughter (please, if you come up with a better name for it, don’t hesitate to tell me. I haven’t thought of a single one. I want it to be gripping, to make you want to pick it up and read the whole thing.) story, as well as a fan-fic story. 😉

Till next time,God bless,
~Emily

Sunday morning, Josiah, Carissa, Brandon (he slept over again, because it was the most convenient) and I left early for church, along the way, we picked up Daniel. Brandon and Daniel play on our worship team, and Carissa and Josiah do slides and sound. I watch the younger children. 😀 (I’m also the person most used to being the third person in the car. Our minivan has only seven seats, and there are ten of us.) After church, Josiah, Cheryl, Rachel (my pastor’s second daughter.) and I went to Suki’s horse show. (I use parenthesis a lot.) I didn’t get any pictures. 😦 But, I did get pictures (well, Miss Carol [our pastor’s wife] took most of them…) while we were at the Ortiz’s, along with the Ursus and Clarkes (the pastor’s family)

The mommies talking. Plus Carissa. And Aidan. 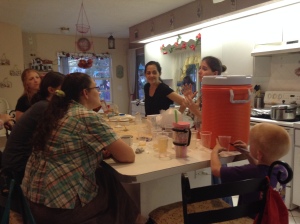 Hannah and Rose Ursu playing with the littles

The boys and men played volleyball. 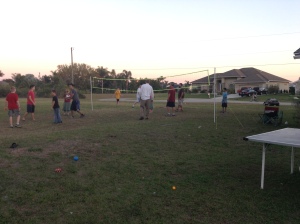 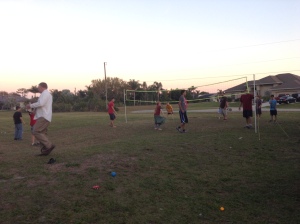 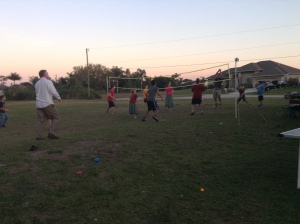 The littles getting into stuff. 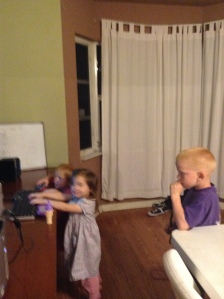 More of the mommies. All of these woman are amazing, and personal examples to me, as well as friends. Especially Mrs. Ursu. 🙂 (Mama most of all, but that’s a given 😉 ) 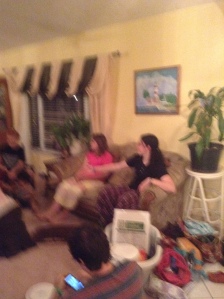 At this point it was so noisy my brain refused to work further, and I had a hard time trying to stay awake. It was crazy. And fun. But mostly crazy. 😉 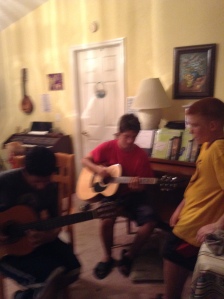 This is after all the mayhem and madness had calmed down a bit. We left fairly soon after. 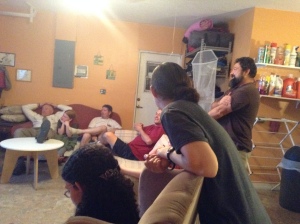 While leaving, (having two vehicles makes leaving take quite a bit longer.) I talked to Mr. and Mrs. Ortiz about another film meeting. Currently we are planning on meeting a week from now at the church, it being a central location. I’m looking forward to it! Since Monday was rather a down day, I’ll just skip to Tuesday. Annnndd….. I have an exciting update (or two!) in regard to the film!

Saturday morning. We all got up, the boys promptly took out their laptops and commenced playing games until we left for the taco party. Carissa and I made breakfast, which was orange wedges and toasted pita bread and scrambled eggs. Then we started cleaning the kitchen, which took awhile. Once the island was cleared off, we began taco preparations. 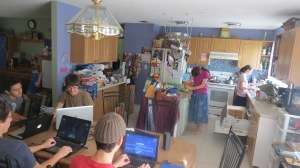 We left at around two thirty/three. The best part of the drive was going over the Sunshine Skyway bridge. Yup. It was in a cloud. 😀 The boys in our vehicle were asking each other if they would jump from the top of the bridge for a dare, money included. Brandon said he would, and I said something along the lines of “No, you wouldn’t, because you would break all your bones and then you’d have to spend all the money you got on hospital bills.”

When we got there, everyone was mingling amid the group. Once we ate, the fun really started. I played Jenga with several girls. I think we played two games, the second one lasted a long time because the tower got really, really tall.

The younger children played outside,

and the boys played football. Then we had chocolate cake.

Mingling after cake and Big Dutch Blitz. (I didn’t have any pictures because I was playing and it was really loud and my bag was all the way across the room and I couldn’t get Mama’s attention so I couldn’t ask her to get pictures. 😦 ) My team won $100 towards our next/first SOS trip. The whole taco party was because of my three elder siblings going on the Central America SOS trip in December. 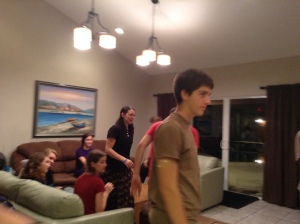 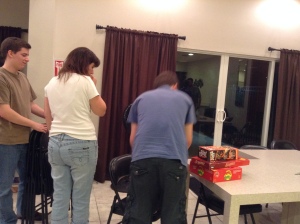 Papa was ready to get the littles home and in bed, so he started packing up.

But since we brought three vehicles (our two plus the Ursu’s minivan), the young adults stayed and played Signs. It was so much fun. 😀 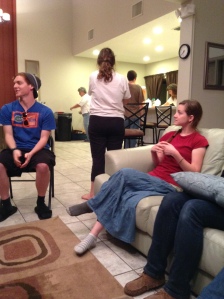 Esther loves getting in the middle of things. 😉

Then we left. It was a blast. The ride home was good, though at first, the boys all confused poor Nick, who was driving. But once we got on the highway, it went great. Cheryl, Suki and I sat in the back and watched videos and talked to distract ourselves from the loud music. 😛 I also possibly came up with a name for a band, but they haven’t talked it over with all the band members yet. So we’ll see. 😀

Once we got home, we went to bed. The End

Friday. What a day. I only got a few pictures on my iPod, but Carissa took some with her camera. So hopefully you’ll get a good idea of what our day was like. 🙂

To start it off, we went to Frontier Days. I dressed up so I could help a lady there whom we know. We helped her out a few years ago with Pioneer days, doing the same thing. I love these sorts of things, so I had fun. 🙂 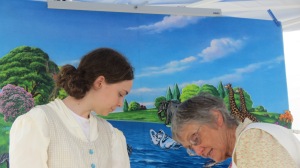 We did flannel-graphs illustrating the story of creation and salvation. 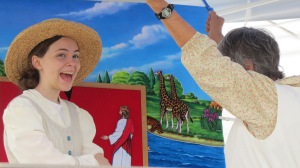 Esther had a blast. 😉 (The candy may have had something to do with it. 😉 )

Then we went to the mall to watch The Lego Movie, but we got the time wrong and were there late. So we walked around the mall until it was time for pickle ball. And we ran in to this odd fellow…

Then it was time for pickle ball. Since I was playing, and the iPod was almost dead, I only got a few pictures of setting up. 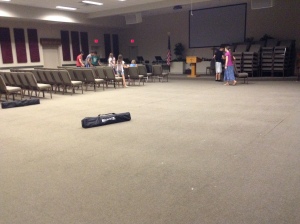 So then we played. I think I only won one game… but I had fun, and that’s what counts, right? 😉

After pickle ball, we decided to go to the movie… at ten. Yes, we’re crazy. We tend to have the most fun that way. 😉 After the movie, I almost left my bag in the theater… the one with the iPod in it… Thankfully I remembered before we left, and we found an open door, and my bag was still in the theater, right where I left it.

Then we went home. Josiah had three of his friends over for a sleepover….

We finally got to bed at one thirty in the morning. Thus started our crazy weekend.

Thursday was a rather boring day, but I got pictures of our breakfast! It was really yummy: Fresh Blueberry Muffins.

They were gluten free, but super delicious. 🙂

And Esther was cute

And I did my history homework. The end. 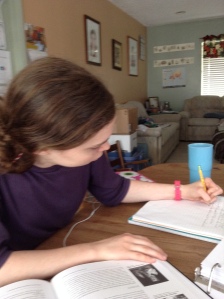