Me: I’m 20 years old. I have 7 siblings, two siblings-in-law, and two nephews. I work for my dad who owns a tile company. Job description: I clean, repair, and colorize grout, and help out wherever needed. My sister Cheryl and I run a drama club which mostly consists of our friends from our homeschool group+a few friends from church. I love to learn. I’m short (5′ 1″). I enjoy music, writing, directing, my friends, and my family. This is where I share my thoughts and other things about my life. 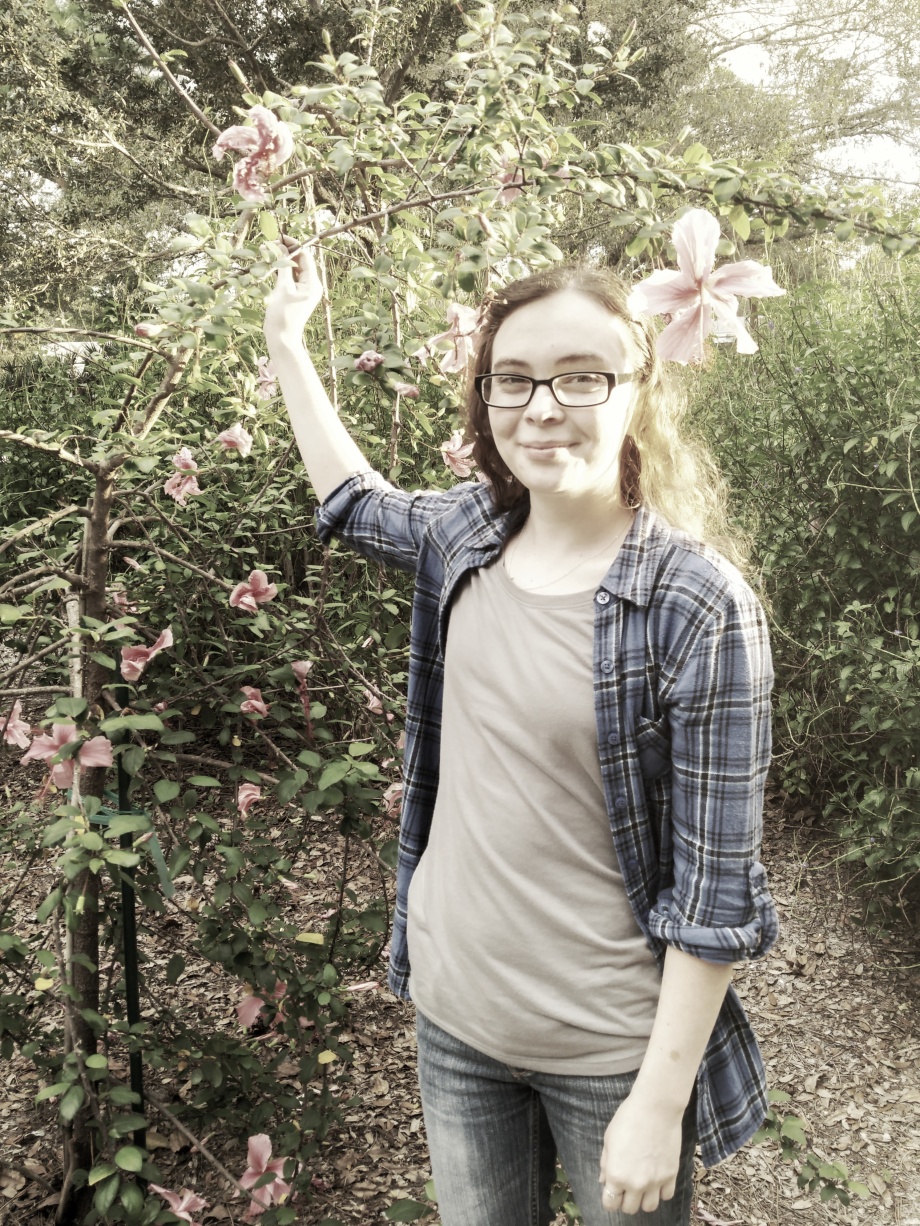 1. What are your nicknames? What do you prefer to be called? Em, Emma, Semily, Wumpy. Of those, Emma is my favorite.

2. What books on your shelf are begging to be read? I currently have about 13 books to read… Top of the list is Mere Christianity by C.S. Lewis.

3. How often do you doodle? What do your doodles look like? I usually doodle during church, mostly letters, words, and flowers/circular designs.

4. What do you do if you can’t sleep at night? Do you count sheep? Toss and Turn? Try to get up and do something productive? If I can’t sleep, it’s usually because I am anticipating something. It can be positive or negative, but it usually involves planning, thus keeping me awake. I try to make a plan that I won’t deviate from, so I can sleep.

5. How many days could you last in solitary confinement? How would you do it? I might make 3 days, tops. I would just think about conversations, the best moments I’ve had, and not focus on emotions or feelings.

6. Do you save old greeting cards and letters? Throw them away? I save them. I love to take them out and read them every once in a while.

7. Who is the biggest pack rat you know? Probably me. I save all sorts of knick-knacks that hold memories of good times.

8. When making an entrance in to a party, do you make your presence known? Do you slip in and look for someone you know? Do you sneak in quietly and find a safe spot to roost? Depends on what kind of party. If it’s with my close friends, I’ll make an entrance and announce myself, if somewhere where there are people I don’t know well, I’ll find someone I know and stick with them until I feel comfortable. Occasionally I just sit and watch.

11. What is the strangest thing you believed as a child? Oh, I don’t know… I believed lots of strange things.

12. What is one guilty pleasure you enjoy too much to give up? Sweet things. They make me feel awful but they taste so good.

13. Who performs the most random acts of kindness out of everyone you know? Probably Elisa or Maria.

14. How often do you read the newspaper? Which paper? Which sections? I try my hardest to say away from news.

15. Which animals scare you most? Why? Um, roaches? Those nasty things smell fear and run/fly at you and you feel them for a long time after.

16. Are you more likely to avoid conflict or engage it head-on? My family would say head-on.

17. What was the most recent compliment you’ve received and savoured? Comments about my hair.

18. What is something about yourself that you hope will change, but probably never will? My ‘need’ to know everything about everyone.

19. Are you a creature of habit? Explain. Yes and no. Certain things I always do in a particular way, but sometimes I will add or take away a part of it.

21. When was the last time you really pushed yourself to your physical limits? Probably at work, doing demolition.

22. Do you have a whole lot of acquaintances or just a few very close friends? Why? Both. I have many friends, but a smaller circle that I am especially close to.

24. What’s a strange occurrence you’ve experienced but have never (or rarely) shared with anyone? Probably the time we were almost out of gas, and then I prayed that we would have enough to get to a gas station, at which I watched the gas gauge go up.

25. What do you think about more than anything else? My friends.

26. What’s something that amazes you? Science. Just think, our brain is in control of our body, but we don’t have to command each muscle to move; we just move.

27. Do you prefer that people shoot straight with you or temper their words? Why? Shoot strait. I can get over it later.

28. Where’s your favourite place to take an out-of-town guest? Well, I most often bring my guests to my church or the beach.

29. What’s one thing you’d rather pay someone to do than do yourself? Why? Kill big bugs. I can’t handle the crunch/squish.

30. Do you have a catchphrase? You kno das rite.

31. What’s your reaction towards people who are outspoken about their beliefs? What conditions cause you to dislike or, conversely, enjoy talking with them? Initially I don’t like them, but I put that away and look at them as if it was me.

32. How and where do you prefer to study? At home, with music on.

33. What position do you sleep in? Stomach.

34. What’s your all-time favorite town or city? Why? Mount Morris, NY. I made some of the best memories there. Also, anywhere with mountains.

35. What are the top three qualities that draw you to someone new? Humor, kindness, attentiveness.

36. How has your birth order/characteristics of siblings affected you? I’m in the middle, but the oldest of the younger, so I guess I got away with a lot, but now I’m the leader? There’s 8 of us total, so I’m not entirely sure.

37. If you could eliminate one weakness or limitation in your life, what would it be? The inclination to not do anything, but let others do it.

38. If you could restore one broken relationship, which would it be? I don’t know if I really have a “broken” relationship with anyone, but there are a few friends that I am not as close to anymore, and I regret that.

39. If you had to change your first name, what would you change it to? Elizabeth.

40. Do you believe ignorance is bliss? Why or why not? Depends on the situation. Most of the time I would rather know.

41. What do you consider unforgivable? I can’t think of anything.

42. Have you forgiven yourself for past personal failures? Why or why not? It try, but often I find I haven’t completely.

43. How difficult is it for you to forgive someone who refuses to apologize? It depends on the offense. Mostly I can forgive, but I am capable of holding a grudge.

44.Do you hold any convictions that you would be willing to die for? Yes.

45. To what extent do you trust people? Explain. I always want to believe people, but sometimes they aren’t being honest. So initially, I usually trust people to the extent that I believe them when they tell me something.

46. In what area of your life are you immature? Controlling my actions. Following through and taking initiative.

47. What was the best news you ever received? That I was going to be an aunt.

48. How difficult is it for you to be honest, even when your words may be hurtful or unpopular? Rather difficult.

49. When did you immediately click with someone you just met? Why? What was the long term result? Conversely, are you close with anyone now that you really disliked at first? The last person I can think of is one of the people I met at lamplighter a few months ago. We still talk often, and plan to visit one another. I don’t know if I’ve ever got close to someone I initially disliked…

50. When do you find yourself singing? When I have a surge of happiness, or a song in my head.

This site uses Akismet to reduce spam. Learn how your comment data is processed.